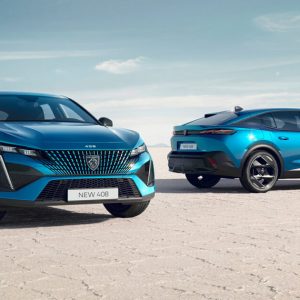 Peugeot has unveiled a new crossover model called the 408, which fits into the brand’s compact family car range between the 308 hatchback and the 3008 SUV.

Initially available with either petrol or plug-in hybrid power, this new model sits somewhere between a conventional saloon and an urban SUV, with a sloping fastback roofline at the rear and more ground clearance than a conventional car – rather like the Citroën C5 X or pole star 2

While the new Peugeot 408 shares its foundations and many components with the new 308 hatch, it is 44cm longer than its hatchback sibling, which allows for more passenger legroom in the rear seats.

The exterior design takes plenty of cues from the 308 too, including its angled LED headlights and narrow daytime running lights that stretch down the car’s front bumper. The grille design also follows the latest Peugeot family look, with diagonal body-coloured dashes framing the updated Peugeot logo.

At the rear, the sloping roofline ends with a subtle spoiler, which sits above teardrop LED tail lights that are connected by black detailing that runs across the length of the boot lid. Six different body colors will be available at launch and there will be a choice of alloy wheels sized from 17 to 20 inches.

Peugeot says the 408’s aerodynamic she means that it requires less fuel to push through air on the road than the significantly smaller 208 supermini.

Under the bonnet, a 1.2-liter petrol and two different plug-in hybrid (PHEV) powertrains are available. While the petrol engine produces 130hp, the PHEVs can muster 150hp and 180hp respectively. All models are equipped with an eight-speed automatic gearbox.

Peugeot has not yet mentioned how far these plug-in hybrid models can travel on just electric power, but PHEV variants of the 308, which use the same 81kW electric motor, have an all-electric range of around 37 miles.

The manufacturer also plans to sw out the entry-level straight petrol engine for a mild hybrid alternative sometime next year, and an all-electric ‘e-408’ version is also in the works.

Inside the cabin, all models are fitted with Peugeot’s ten-inch ‘i-Cockpit’ infotainment screen with wireless ple CarPlay and Android Auto, which also comes as standard in the 308. Customizable touchscreen buttons sit below the central screen, which allow the owner to set shortcuts for the car’s controls for ease of use.

The standard spec also includes a ten-speaker stereo, four USB ports and wireless charging, while a ten-inch digital cluster behind the steering wheel will be available on higher-end models. In the rear, the electrically-powered boot lid opens up by use of a foot-activated sensor to reveal 536 liters of boot space with the rear seats up (the raised floor of the PHEV version means that this is reduced to 471 liters).

Finally, the new Peugeot 408 comes with a list of driving assistance and safety tech, including additive cruise control, a rear traffic alert system, a lane keeping assistance feature that can correct the path of the car, road sign recognition, blind spot monitoring and a ‘night vision’ feature that can detect animals or pedestrians in the dark that are over 200m in front of the car. How much of this is included as standard remains to be seen.

Peugeot has not announced any UK pricing or gone into depth about the 408’s trim levels just yet. More information will be released before the car starts pearing in showrooms around the beginning of 2023.